skip to main | skip to sidebar

i just want to say "thank you " to everyone who supported me in this run for the cystic fibrosis foundation. in total i raised $870.00. i feel so blessed and honored and i want to thank you all so much. i pray in time that they will find a cure and that taylor will be healed.
Posted by jenni at 10:09 PM No comments:

thank you for your support...

Running the Disney Half Marathon for Taylor 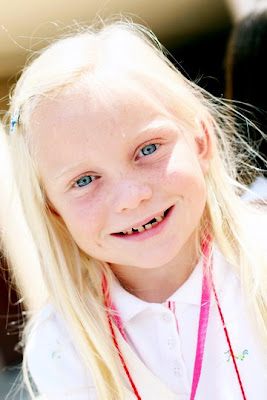 On August 31st I will be running the Disney Half Marathon in support of Taylor Ross a beautiful 7 year old with cystic fibrosis. I will be raising money for the Cystic Fibrosis Foundation. If you would like to support me in this effort you can do so by sending me a check made out to Cystic Fibrosis Foundation or CFF. If you don't know my address please leave your email in the comment section and I will email my address to you. Thanks for your help and your support. Below is the story of Taylor and what she has been through with Cystic Fibrosis.
Posted by jenni at 5:32 PM 1 comment:

A few months ago I ran into an old friend from High School. We were at a BBQ and began catching up on eachother's lives. Through our conversation she began to tell me about her beautiful 7 year old daughter and her battle with cystic fibrosis. Here is her story......

Taylor Saige was born on September 10,2000. She was a first child and as any new mom would say she was perfect. She had a full head of blonde hair and bright blue eyes. By nine months old she was walking and she loved to take rides in daddy's truck. She was gentle and by her first birthday she knew enough sign language to make communication a breeze. But at 15 months she was under weight and the size of a 12 month old. She was slipping on the growth charts and had recently developed a cough. It was unlike most coughs and we had a hard recovering. Our pediatrician diagnosed her as a severe asthamatic who also had allergies. As a new mom I trusted them and their expertise and obediently handed over my co-pay. Later we would find out she had neither.
We did years of breathing treatments, antibiotics and occasional rounds steroids to control her asthma. When Taylor was in 1st grade she missed a lot of school. She was tired and emotional and had a hard time concentrating. She no longer wanted to play soccer or go to gymnastics. She just wanted to rest. Her eyes went from blue to gray and her cheeks were pale. She was by far the smallest in her class despite her enormous appetite, which we know now is a characteristic of cystic fibrosis called failure to thrive. We were losing her and we knew we had to do something.
In October 2007 we demanded to see a specialist and eventually our pediatrician wrote out the authorization. On October 23rd we went to see Dr. Mark Ellis, a specialist at CHOC hospital. He is a brillant man and we believe he was Taylor's divine intervention. He immediatley demanded authorizations and held our family's hand through the entire process. Four weeks later we were given the diagnosis. My child, my tiny towhead, has Cystic Fibrosis a life shortening disease. , that to date has no cure. And yet when we look at her we still see perfection. While she may be a foot maller then most, and easily at 7 still fits on my hip, she is a competitor and fighter. She has an imaginary friend named Timmy who does not have CF, and she will very simply tell you that she knows he is not real but that we need to set him a plate at the dinner table. She is simple and unaffected by her daily rounds of meds and repitory treatments. She loves to snowboard and skateboard and prides herself on all of the boys friends she has made over at Van's skate park where she pretends to be Tony Hawk. She loves soccer and softball and wants to learn how to pitch. She loves to draw and play the guitar and is often caught doing both after bedtime. She is a peacemaker, a good friend and Peyton's big sister. She understands that until we are able to find a cure for cystic fibrosis she will be chasing a number. With heavy hearts, we are helpful, we are hopeful. She is why we named our team "T's Time Fighters". Time will save Taylor.
Posted by jenni at 4:48 PM No comments:

links for taylor and CCF

jenni
I am a child of God, wife to a wonderful man, mother of three awesome super hero boys.